Ever wonder which programming languages are most in demand in the current software development market? I do, and it occurred to me that Stack Overflow Careers would be a great source of information since it has a relatively large number of job listings (generally around 1500) and each one is tagged with relevant keywords, often including the programming language.

Since Stack Overflow Careers does not appear to have an API, I wrote a simple script to scrape the listings and extract the tags. As a bonus, this yielded data on a broad range of software development skills, not just programming languages. I dumped the raw data into a [Google Spreadsheet](https://docs.google.com/spreadsheets/d/1_cBRRDwo_BUpt7yLH84fy8j1koHco9RqKrE2XwR00gI/edit?usp=sharing" target=" _blank) (you can see it in the "Raw Data" tab). I then did a bit of manual and automated preprocessing to massage the data into a convenient form in the "Processed Data" tab: 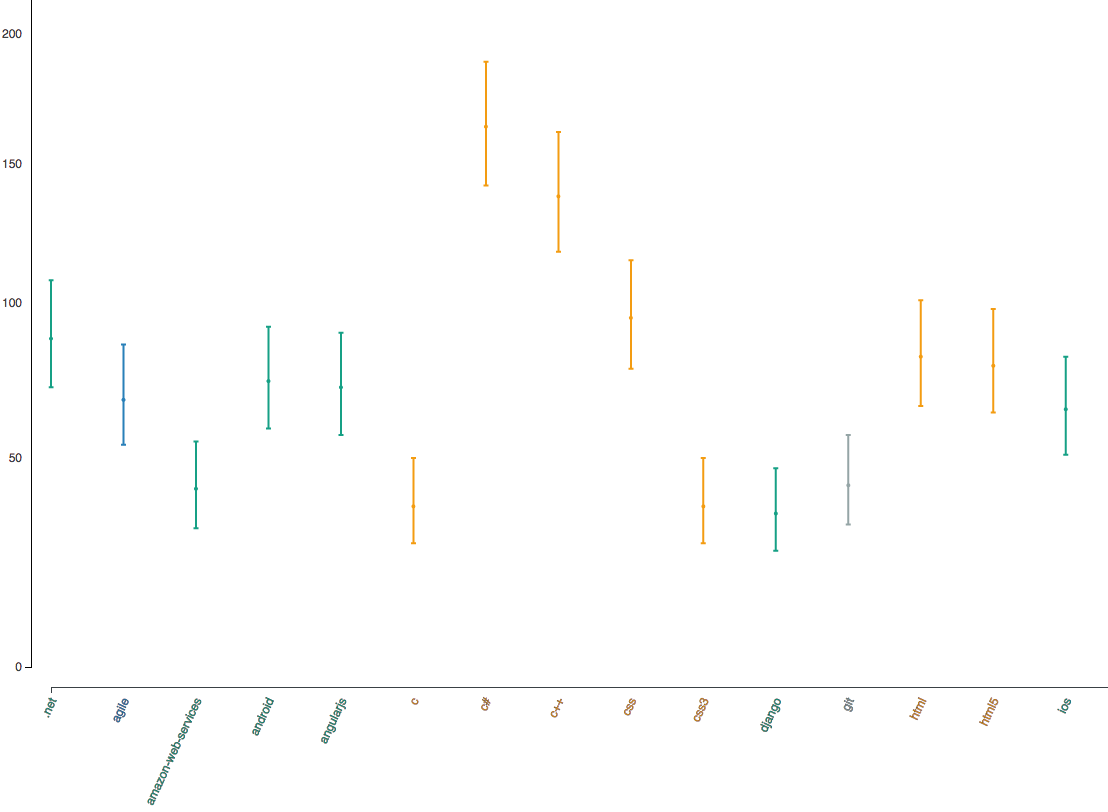 My awesome colleagues Tomas and Igor were kind enough to whip up [this simple interactive chart](https://www.javascripting.com/assets/s3/blog/stack-overflow/stack-overflow-careers.html" target="_blank) using D3. You can see the occurrence values for each tag with confidence intervals. Use the checkboxes to choose which categories you want to view (assuming you don't hate the way I classified them). Use the slider to filter the results to a specific range of occurrences (e.g. only tags with more than 100 occurrences). You can also zoom into a specific section of the chart by selecting it with the mouse. Fun, isn't it?

Of course, this is a relatively small sample size, and there is no evidence that Stack Overflow Careers is representative of the broader job market other than common sense (and we know how unreliable that is). It may be that the vast majority of employers are looking for developers to code in Brainfuck for BeOS, but for whatever reason they choose to list their job postings elsewhere. With that caveat, here are some random observations:

Did you know that people still code in Java? Amazing, eh? When you do web development, you tend to think of Java as just one of a number of plausible server-side languages (and by no means the most popular). In reality it is the most sought-after programming language by a lot, probably because its usage is the aggregate of a zillion pre-web systems that are still actively developed (in the finance industry, for example) as well as a fair number of web backends. And it certainly doesn't hurt that it is used for Android development as well.

The second most popular language is JavaScript. No surprise there since it is the only language that runs natively in the web browser, and it has become a major server-side player as well with the advent of Node.js. Slightly more surprising is that languages that transpile to JavaScript for execution in the browser are virtually absent from the dataset. Of the obvious contenders, CoffeeScript is the only one present at all, with a measly 5 occurrences, the same as Haskell (and we all know no one uses that). No TypeScript, no Dart, definitely no PureScript or ClojureScript.

Angular.js is in a league of its own

The level of demand for Angular.js developers is startling with 72 job listings, on par with Android and HTML. No other JavaScript framework even comes close. Competitors that are often mentioned in the same breath, like Ember and Knockout, have only 3 occurrences in the job listings. Only Backbone is even in double digits, with 23 occurrences. Even if the dataset is skewed in favor of Angular for some reason, it is clearly the default choice for single-page web app development currently.

No surprise here. These languages aren't in the same league as Java(Script), but they are significantly ahead of the rest of the pack.

Android and iOS are neck and neck

Android has a few more occurrences but the confidence intervals overlap almost perfectly. It seems inevitable that one or the other will pull ahead, especially since the trade-offs of developing for one or the other are so stark. Without more historical data it is impossible to say where the momentum is, however, so we'll have to wait a few months and run the analysis again.

Linux has 102 occurrences, Windows has 8. This is such as stark difference that I'm not sure whether employers truly aren't looking for Windows devs, or it's such a standard skill that it is assumed if no other operating system is specified. There might be a little bit of both at play here but it is hard to shake the feeling that there is trouble ahead for Microsoft.